Teaching yourself to spot Mid Century Modern Design is easy. Take a minute and look at the chart above. The left column has Geometric shapes and the right column has Organic forms from nature.

Now, scroll down and compare those images with the gallery of furniture, home decor and product designs I have provided below.

Not to be elementary, but do you see how any of these pictures would fall either on the geometric side or the organic side of the chart?  Or maybe even both? Just 2 simple things to look for.

Great! You’ve just made your first assessment of what Mid Century Modern design might look like! (our impressions are in the captions as a guide) But, you may have a different point of view.

Creative designers of this era used these geometric + organic shapes and forms from nature to create something not seen before.

The use of high contrast in shapes and colors were intended to command your attention through:

Organic Colors: (dark browns, tans, autumn gold, beet red, shades of citrus) appearing on the most unexpected objects & in the most unusual places.

They simply reflected an age of the USA / USSR space race and living with the Atomic Bomb threat looming over both adversaries.  The Cold War.

Organic elements of nature were fundamental in mid-century designs, especially in architecture.  Architects would design buildings owing their style to integration with natural surroundings. A prime example would be Frank Lloyd Wright’s creation Fallingwater 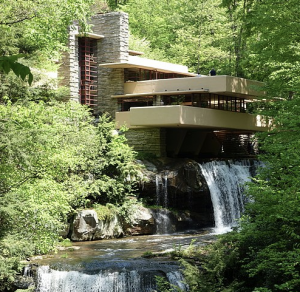 This was his masterpiece of “organic architecture”.  Constructed over a waterfall that actually runs under the house, it truly reflects one of the cornerstones of Mid Century Modern Design – bringing the outdoors and indoors together.

Designers were making a statement with new forms, colors, and designs to meet the needs of this modern highly industrialized post-war world.

If you are new to Mid-Century Modern, my desire is that this section helps you see “why” things look like they do and “how” they came about from this modernist period.  Maybe you’ll recognize the style that’s influenced a great many things in your current daily life.

Give me the luxuries of life and I will willingly do without the necessities
Frank Lloyd Wright - American architect, interior designer, writer, and educator